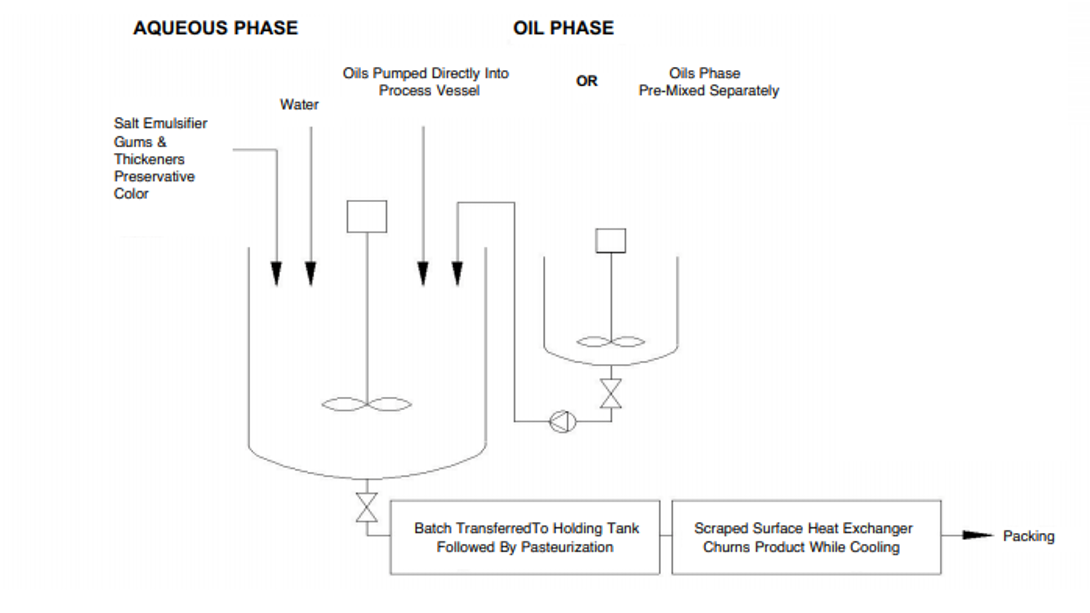 Margarine is similar in taste and appearance to butter but actually possesses several differences. Margarine was originally developed as an inexpensive substitute for butter using oil rather than milk fat, but over time it has become nearly interchangeable in the marketplace offering less fat and cholesterol at a lower cost.

Margarine is considered a water-in-oil (w/o) emulsion; which means, the water (i.e. the dispersed phase) is distributed as droplets within the oil (i.e. the continuous phase). The levels of fat and water in margarine are similar to those found in butter but are typically regulated to a minimum of 80% fat and a maximum of 16% water. The remainder of the ingredients consists of salts, proteins,  emulsifiers, vitamins, colors, and flavors. The levels in calorie-reduced margarine are also regulated to contain not less than 40% fat while having 50% of the calories normally present in margarine.

Many other low-fat spreads have similar ingredients to margarine but the oil content can vary dramatically, ranging as low as 20%. In these low oil level emulsions, gums and thickeners replace the fat adding structure and viscosity back into the product.

In the initial step of processing, the water, salt and emulsifiers are mixed together in an aqueous phase tank while the oils and oil-soluble ingredients are premixed separately. The oil phase is then pumped to the aqueous tank or both tanks are fed to a third emulsification chamber while the blend is continuously mixed to form an emulsion. Equipment sensors and regulating devices maintain a temperature of ~100°F (38°C) during this stage of processing.

Next, the emulsion is pumped through a scraped surface heat exchanger to churn the margarine while cooling to ~45-50°F (7-10°C). It is then either fed to packaging or a storage vat to sit still and set into a semi-solid state. At this stage of processing the margarine is occasionally agitated to prepare special consistencies, such as a whipped product. 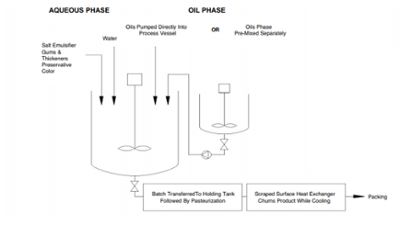 Quadro Ytron® mixers are able to overcome all the above challenges. Batch size, formulation, type of ingredients and viscosity of the end product dictate the selection of equipment (Jet Mixer, ZC Powder Disperser, Z Emulsifier or a combination of
equipment).

For the production of the typical water/oil (20/80) emulsion, Quadro recommends the combination of a Jet Mixer with a bypass assembly and the Z Emulsifier.

The solution is prepared by dispersing the powders via the bypass assembly on the Jet Mixer. Oil is then added to the vessel and the axial flow pattern of the Jet Mixer ensures an instant homogenous pre-blend which is pumped through the 3 stages high shear Z Emulsifier to provide a single pass finished emulsion.

For low-fat applications incorporating gums, Quadro recommends the combined use of ZC Powder Disperser and Jet Mixer. The ZC is designed to disperse extremely difficult to wet powders in a single pass without agglomerates.

Powder incorporation can be completed during the water addition phase or in recirculation from the vessel. It is achieved by the presence of a significant vacuum in the reactor generated by a liquid seal created between the rotor and stator. The powders are then subjected to enough shear to provide a single pass of complete wetting before hydration is completed and returned to the processing vessel. Oil is then added to the vessel and the Jet Mixer provides the homogeneous pre-blend before recirculating through the high shear ZC to provide the finished emulsion.

Manufacturing of Sunblocks and Creams With A Mixer